Throwing Spanners to Help the Works: Part 3 – Next Steps

Last week, my wife Ondina stepped on a thorn from a cactus plant shown in the 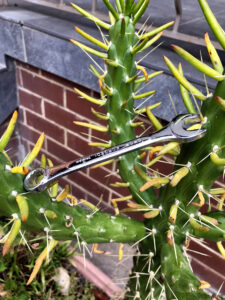 attached picture.  She was wearing shoes, but they didn’t provide much resistance. I can’t quite describe the sound of her scream.  It was one of those that said the pain was off the charts.

Fortunately it didn’t cause any major damage apart from the initial shock.

I think the image of a scary looking cactus plant is useful when we think about how hard it is to give someone challenging feedback.  To tell them what they are doing, or not doing, is having a negative effect on you, and possibly others.

The thought of doing so often feels painful.  It doesn’t matter if we are talking about work or home.  These are prickly conversations we want to avoid.

I know I’m not alone in being a master at pulling out a never ending list of reasons to excuse myself from having the tough conversation:

Maybe there’s no such thing as a ‘good time’ to have such a chat, or, maybe there is?

What if there was a spanner we could access, to throw in the works, that would give us the courage to step up to the plate?

I would argue a good spanner to pull out of the toolkit is the ‘Hard? Yes!  Right thing? Yep!’ Spanner.  This is a spanner which can shift our mindset and enable us to overcome our chronic avoidance.

If avoidance was a rusted on nut, so difficult to budge, the ‘Hard? Yes!  Right thing? Yep!’ spanner can help loosen it.  When we recognise something is the right thing to do, it becomes harder to keep on avoiding.  We can’t unknow what we have now, consciously accepted.

But how do we know it’s likely right?

Pretty simple. Just ask yourself some of these questions:

And here’s the clincher. Because it is the right thing to do – to have such a conversation, in good will, I’ve rarely seen it be as painful for the receiver as we imagine.

It’s not like that sharp spike that plunged into Ondina’s foot. Maybe uncomfortable, but if motivated by good intent, they pick up on that.

Challenging conversations are hard, but they’re not a dangerous cactus. Most often they are the right thing to do.

Pick up that spanner and loosen the avoidance nut. Everyone serves to benefit when we do.

Throwing Spanners to Help the Works: Part 3 – Next Steps